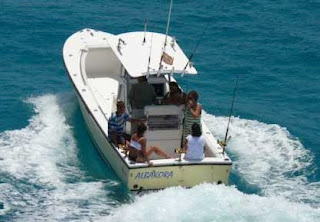 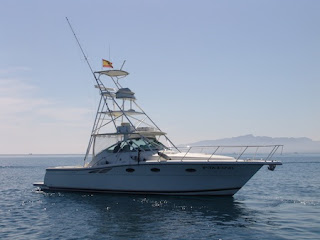 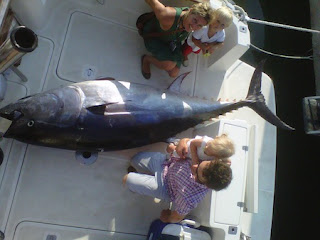 Why don't we go Fishing in Cambrils today? 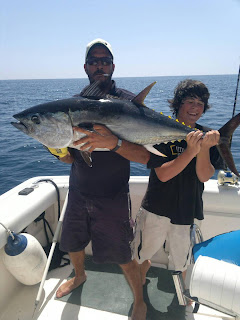 Without any doubt, the Golfo de Sant Jordi – the gulf between the Cape of Salou and the Ebro Delta – is one of the best fishing areas in the Spanish Mediterranean. You can go inshore trolling in the natural reserve of the Ebro Delta, you can discover the hidden bays and white beaches with your private luxury yacht or maybe you want to go tuna fishing… We organize unforgettable half day and full day fishing tours from Cambrils. Book a boat with your family and friends and enjoy the Mediterranean Sea from the other side!

We are based in the small village of Cambrils situated in Southern Catalonia, Spain. This village has a long marine history with a relaxed Mediterranean ambiance, where every angler will feel at home. Cambrils is one of the few coastal towns that have succeeded in maintaining its pueblo charm and character. Notwithstanding, all the tourist facilities are here, including hotels, restaurants, leisure and cultural activities and shops.
Big Game Off Shore Fishing
April marks the start of tuna fishing off the coast of Costa Dorada. Tuna pass the Strait of Gibraltar to spawn in the Mediterranean Sea. We fish off shore, about 20 to 40 miles from the marina of Cambrils. These areas have a depth of 800 to 1000 meters with interesting undersea structures, weed lines, clean water and temperature breaks that attract plenty of baitfish. These waters provide plenty of predators like bluefin tuna, yellowfin tuna, swordfish, etc

During the early months there’s trolling for smaller tuna (about 10 – 30 kg) but towards the summer months the bigger fish start to bite. This is when the huge bluefin tuna of 200kg, 300kg and even 400kg can be landed.

For those who don’t want to go too far away from the coast, there’s inshore trolling. Generally spoken we troll with small lures to catch mackerel, horse mackerel, bonito, barracuda and others. With bigger artificial bait and with life bait (squid, octopus or small barracuda) we chase palometon, bluefish and amberjack. Good months for fishing cambrils are July, august and September.

Chumming or chunking is a fishing technique that works very well during the summer months. We let the boat drift and we attract the game fish (especially tuna) by constantly baiting with sardines, mackerel and other small baitfish. This technique is very successful to catch giant bluefin tuna. In our area we catch them at a few miles from Cambrils. You don’t have to go that far away to catch the bluefin tuna of your dreams!

1) Tiara 3500 – 11m, 2 x 350 HP, max. 8 persons – from 720 Euros
The price includes the captain, diesel, fishing tackle, bait and lures, insurance, licenses, tax
David Bono is the skipper of this great boat. He has a vast experience in these type of boats and, for example, classified second in the Catalonian Fishing Contest in 2008.

Both participated, as guide and skipper from the “Il•lusió” in the “World Big Game Trolling Championship Clubs” of Javea in 2008. They were in charge of two French teams and an Italian team.

Nobody can guarantee the catches, but with these two guys you will have the best chances to enjoy a perfect day fishing with many catches… 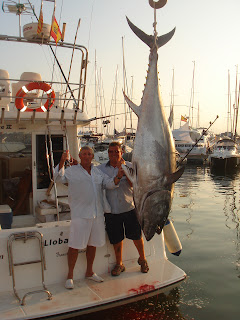 Sport fishing boats and Cetaceans in the Strait of Gibraltar

Game fishing for Tuna - Fishing charter in Spain - is an issue of concern because of direct injuries from the hooks pulled behind the boats. On some occasions these injuries are caused by disrespect for cetaceans, by boats that cross their swimming direction or that drive into groups of cetaceans, even as they swim beside whale watching boats. One reason is that some believe the tuna swim underneath the dolphins. This might be true in the Pacific Ocean, but it’s not in the Strait of Gibraltar. The migration of tuna between the Atlantic and Mediterranean is not related to the permanent presence of cetaceans in the Strait of Gibraltar.
The following photos show injuries caused by fishing gear. Some of them may have been caused by illegal drift nets, but most have been infringed by the lines pulled by private tuna game-fishing boats. When the line starts to cut from the trailing edge of the dorsal fin and the whale eventually dives, only a small front portion of the dorsal fin is saved. We observe most of the fresh injuries during the tuna fishing season, when up to 40 sport boats can be seen at once in the Strait.

Whale watching
In 2007 whale watching guidelines were implemented in Spain, but some captains have not lost there old habits. They argue that the whales are habituated to ship traffic and can be approached without much disturbance, but it makes a great difference if a big vessel crosses straight or if a boat follows the whales, disrupting their natural behaviour for a longer period of time. It is even worse when one boat calls the other by radio, causing a continuous presence at one group of animals. The following photos show a Pilot Whale with a deep cut from a propeller, caused by a stopped boat (since a driving boat would have caused multiple cuts). Unfortunately it cannot be excluded that it was originated by the propeller of a whale watching boat.

REAL DECRETO 1727/2007, de 21 de diciembre, por el que se establecen medidas de protección de los cetáceos.
ANEXO II
1. General code of conduct while observing cetaceans inside the previously defined mobile protection space:
A. It is prohibited to use sonar systems to detect cetaceans or to push them to the surface.
B. Ships must move at constant speed of 4 kn. or as slow as the slowest animal in the group, but not inside the “prohibited zone”, where a different code of conduct specified at section 2 of this appendix must be applied. Once finished, the ships must continue at that constant speed until having left the mobile protection space.
C. The approach must be done converging slowly from one side at an angle of 30º to their swimming direction, never from the front, from behind nor perpendicular to their trajectory. While observing the cetaceans the ship must navigate parallel, without sudden changes of speed and direction.
D. Boats approaching simultaneously must coordinate it by radio, in order to reduce the disturbance as much as possible.
E. If the engine was stopped and is started again, it must be kept at empty running for at least 1 minute. Every change of the revolutions of the engine must be done smoothly.
F. Driving backwards is only allowed to avoid collisions with other ships or cetaceans.
G. Never drive in circles around the cetaceans.
H. If cetaceans approach diving people, the latter must avoid interacting with them and leave the area as soon as possible safety allows.
2. General code of conduct while observing cetaceans inside the different sections of the previously defined mobile protection space.
In the Prohibited Zone:
A. Permission to navigate only under emergency circumstances.
B. If cetaceans emerge suddenly at less than 60 m from the boat, the propeller must be stopped.
C. As long as animals remain at less then 60 m from the boat, the propeller must remain stopped and can only be reengaged some minutes after departure of the animals. The navigations must be started smoothly, taking especial care in making sure no animals hang about the propeller.
D. If the emerging animals are dolphins or porpoises, it is allowed to continue with constant prudent speed, maintaining the initial speed.
E. Sonar must stay switched off.
In the Zone of temporary stop only:
A. Prohibited if lonely calf-adult pairs or lonely calves are present.
B. A maximum of two ships are allowed at once.
In the zone of special care:
A maximum of two ships are allowed to stay waiting if two other ships are already inside the Zone of Temporary Stop and they have to wait until the first arrivers leave. Ships must coordinate movements through radio.
In the Aerial Zone:
It is prohibited to stay.
In the Submarine Zone:
It is prohibited to stay.
Publicado por Thomas en 3:48 1 comentario: 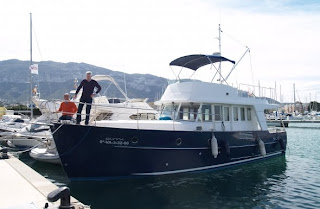 Located in the northern part of the province of Alicante, touching the border of the province of Valencia, Dénia is one of the best sites for fishing in Alicante. Its location, next to Cabo de San Antonio and across from the Balearic Islands, make the waters of Denia in a privileged place for big game fishing, trolling and deep sea fishing. Denia is ideal for family vacations because it offers beach, mountain, quality hotels, bars and restaurants, many shops and ... great fishing! We offer fishing trips with a spectacular 13.6 meter boat called the Dunna. It is a new yacht with plenty of room, comfortable and well equipped. Climb aboard and relax ...

The 450 kilometers of coastline that separate Vinaros from Torrevieja offer so much to fish. However, the epicenter of fishing in Valencia is Cabo San Antonio. The respective fishing ports of Denia and Javea are strategically placed for big game fishing, deep sea fishing, sport fishing and deep sea trolling. The great advantage that these ports have is that the fishing grounds are close by.

Passing through the Ibiza Channel is mandatory for the large predators like the bluefin tuna and the albacore that go to spawn around the Balearic Islands and the Leon Gulf. The respective ports of Jávea and Denia are strategically well-located for big game fishing, since only 20 miles from the coast, you can find depths of 1000 meters. To give you a better idea: from Alicante we have to sail about 40 miles to find depths of 1,000 meters. The best months for fishing are June, July and August. 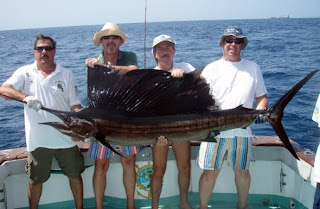 In our search for the best fishing charter on the Costa del Sol, we drove along the coast, passing through the ports of Malaga, Benalmádena, Fuengirola, Marbella, Puerto Banus, Estepona, Sotogrande, etc ... We already knew dozens of fishing charters at these ports, but we wanted to ask people which one they would recommend to charter a fishing trip, again and again we were recommended the same person: Oscar. They already spoke highly of him in the nautical fair of Barcelona, but when we met him in person and there was no doubt: he was the best.

Puerto Banus is located just 15 minutes by boat to the best fishing areas around Malaga. While the seabed off the coast of Benalmadena is mainly sandy, here in Puerto Banus there are a wide range of rock formations, ridges and wrecks. For example, less than two miles from the port is an area called "Las Bóvedas", where the seabed rises from 70 meters to only 19 meters. Clearly these seamounts generate tremendous currents and attract a lot of fish. In addition, only 20 miles away is the Strait of Gibraltar, a real nursery, which feeds the area with large predators such as the pink dentex, amberjack or grouper...
Banús is just outside the "funnel" in the Strait of Gibraltar, which does not suffer the harsh weather of the Strait. Many are the days when the weather prevents fishing in the Strait, but there are no problems in the area of Banús.
Publicado por Thomas en 9:34 No hay comentarios: